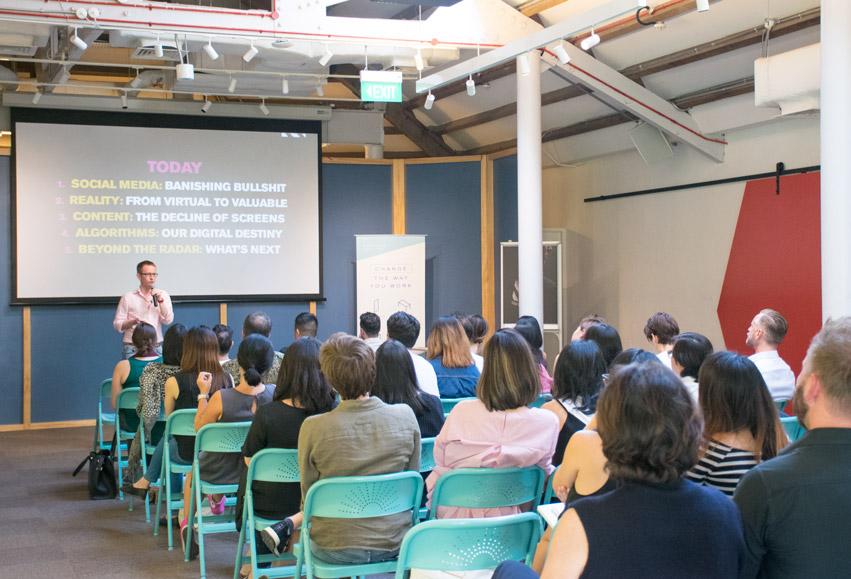 The Future is Here

I’ve spent a long time in denial, but the last three weeks have broken new ground in my brain. They’ve made it clear: it’s here. “It’s” a thing. What’s “it”? Whatever we thought was round the corner, coming up at the bend; a distant possibility; the future, my friend.

It took three specific events hosted, in quick succession at The Working Capitol, to seal that deal for me.

Then, a little over a week later – a breakfast session with Hyper Island co-founder Jonathan Briggs, asking the question, “Are we getting digital wrong?”

Finally, that same evening, the latest Product Hunt Singapore meetup, for over a hundred astropreneurs and astrophiles to gather and hear from four spacetech startups. That’s right. Spacetech – as in, outer space-tech. Galactic-tech. Out of this world-tech.

These set into motion some emotions – a few of which, admittedly conflicting, and others of which, also admittedly, I’m not done processing. But here’s me trying. And I thought I’d share:

1. Never assume anything is impossible, ever again.

Maybe I’ve been living under an earth-rock, but I only just found out that space is no longer inaccessible – as in, for people like you and me. How do we know? There’s a name for it. It’s called “NewSpace” and it refers to the surge in innovation that’s now happening around the next-next frontier.

To put it in the words of Mark Dembitz, a Product Hunt presenter: “[Today,] one person with one Macbook Pro can operate 25 satellites.”

Mark works for Spire, a satellite-based data company offering insights that have been traditionally off-limits or guesswork. These insights make weather forecasts more accurate, planes and ships more trackable, and is just one example of the new wave of startups (and jobs) that’s been unlocked.

In his presentation, Kemp ushered us to the fringe of technological potential – showing us an honestly jaw-dropping proof-of-concept video for nous by Thought Wired – before reeling us back into the more immediate, more manageable future.

First things first, according to Kemp, and before thought control becomes mainstream, we’ll move into an era of voice control. So, that smartphone you finally got used to typing on? Yeah, don’t get too attached.

Struggling to keep up? Tell me about it. Sometimes I feel breathless just trying. Which is frankly why I’ve decided to assume that I am going to continue to be awestruck by the capacity of the human race, over and over again. And instead of trying to prepare myself for a specific future that may never happen, to prepare myself simply to be prepared. This means cultivating resilience, adaptability… Little things like that. I mean, you’ll never catch someone going, “Damn! What was I doing learning how to be resourceful? Shouldn’t have wasted all that time.”

“Tech is neutral,” Briggs reminded his audience. “We are not.”

Fire can destroy us, but the heat it provides is life-saving. The tool isn’t inherently evil; it’s what you do with it. It’s how you harness it, but in order to harness it, you have to be able to speak its language.

Our digital journey is far from over; in fact, it’s barely begun, and we’re the ones who are going to determine how it plays out. Everyone who spoke – from Kemp to Briggs to Dr. Bidushi Battacharya (founder of Battacharya Space Enterprises and godmother of the local astropreneurship ecosystem – said this in one way or another. Our most important resource as a collective, is the individual.

The individual can create and contribute. We vote with our money, our time, and our attention, and in these ways and for these reasons we have to demand more of ourselves, of each other, and of the brands vying for our support.

We have to learn to ask the uncomfortable questions and to be more critical.

We have to design for people, not for profit.

We have to include, to seek out opinions and experience divergent from ours.

And we can’t be caught up in fear.

We have to believe enough in ourselves to believe we can create the world that should be created. And every day, we’ll have to make that choice.