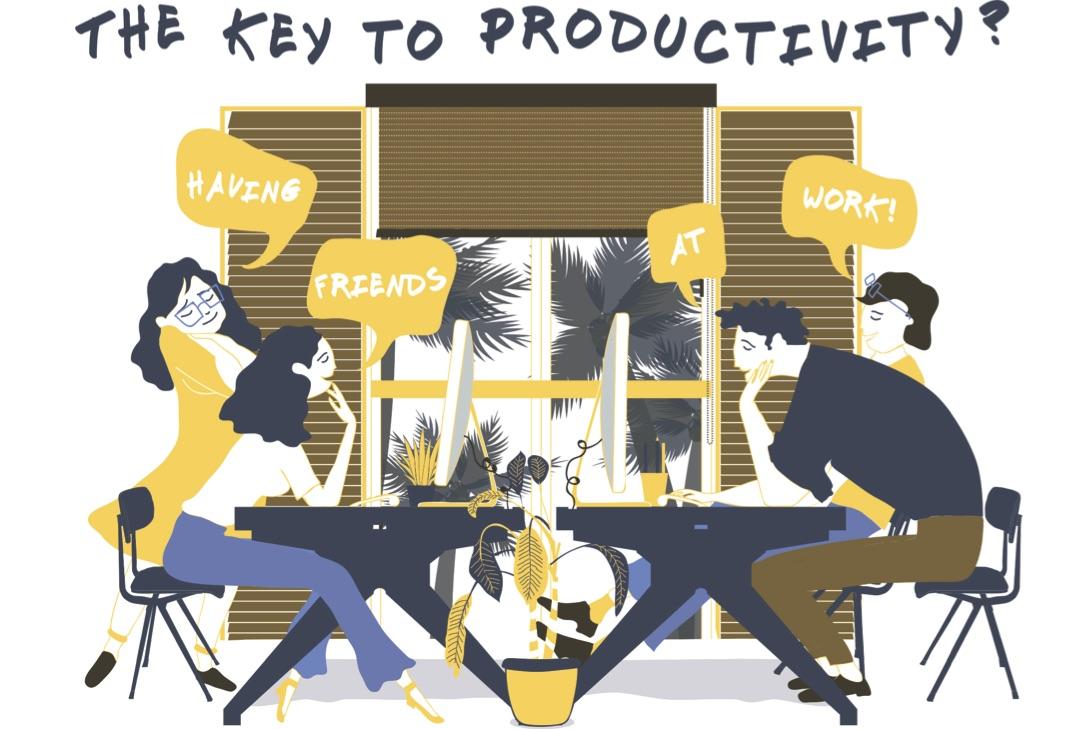 The Key to Productivity? Having Friends at Work

At their headquarters in Vancouver, social media management software Hootsuite launched an unusual initiative, with the aim of encouraging employees to socialise more. Random Coffee paired strangers from different departments up for a quick coffee date. The smiling, caffeinated results are all over Twitter.

Hootsuite is onto something big here. Having work friends means so much more than having someone to go for coffee with.

There have been plenty of adorable things written about the joys of having a “work spouse”— that is, your go-to coworker pal who pumps you up before meetings and saves you a company-sponsored doughnut when you’re running late in the morning. But beyond sentimentality, close friendships at work strongly correlate to productivity; a few years ago, a Gallup study discovered that people with a “best friend at work” are seven times more likely to be fully engaged at their job.

MIT professor Alex Pentland, who studies how ideas move through groups and affect productivity (he calls this “Social Physics”), has found that one of the most important measures of predicting productivity is the amount of interaction among team members. When engagement is high, productivity follows. Engagement here doesn’t just involve brainstorming during meetings; it could be talking around the coffee machine or when you bump into each other in the hall.

Having the space and opportunities to open up and get to know one another on a personal level is key. One scientific study learned that when coworkers focused more on nonwork-related topics and disclosing information about themselves in conversation, they became both more productive and more collaborative at work.

But what if you’re a boss? How do you manage to be a friend to your employees without crossing the boundaries of professionalism? The truth is that upper management has to walk a thin line in social settings, but that doesn’t mean they can’t let their guard down after hours.

Walking that line effectively can be as simple as knowing when your presence can help or hinder. For example, at Accela, I often come to happy hours with the team, buy the first round or two of drinks, and then duck out. This allows the team to unwind further without feeling the pressure of the boss’s presence, but also a chance to spend time with me outside work and vice versa. Win-win!

The bottom line is: socialising with coworkers is an opportunity to increase your productivity and have fun doing it. Organisations can help by investing time and resources into helping their employees build personal relationships with one another, but that doesn’t mean you can’t start on your own today.

Grab a random coffee with someone from another department; ask that new hire about anything from the most interesting thing they did over the weekend to how they feel about the revival of ‘90s fashion; save your work spouse a Krispy Kreme. You’ll feel the ripple effects.